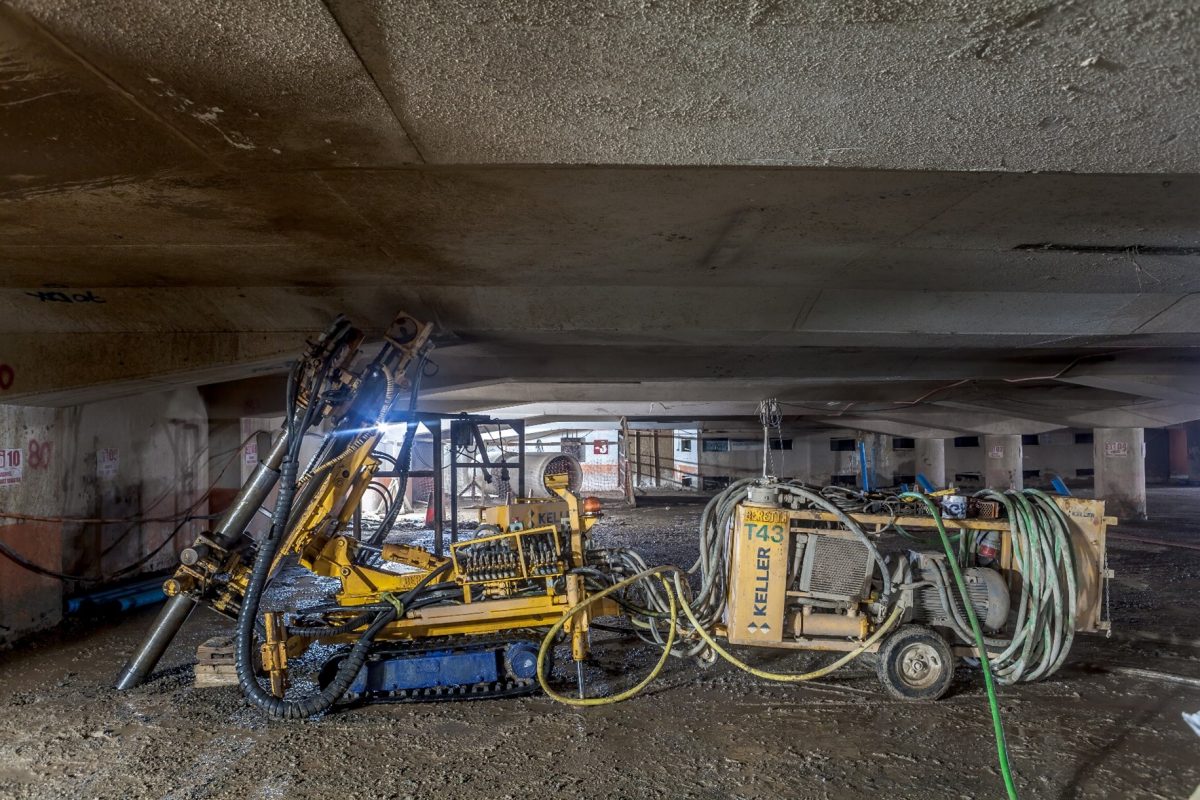 Keller started a contract where work had to be carried out to improve the soil, using the jet grouting technique, under the 2 underground parking lots on Avenida Américo Vespucio, Military School sector in Santiago (Chile).

The aim of the project was to improve the soil below the existing structures to permit the new road tunnel excavation under the parking lots. The execution was done from the level -3 of each parking.

This project is one of the jobs to be executed for the construction of the new Américo Vespucio Oriente highway.

To determine the execution parameters, prior to the beginning of the treatment, a field test was carried out. This consisted in the execution of several Jet Grouting columns to test the soil, the methodology and equipment. The process was controlled thru the KELLER’s automatic system M5® for execution parameters log, and the diameter obtained into each column was checked with KELLER’s ACI® system (Acoustic Column Inspector) without columns excavation.

There were a few challenges to overcome throughout this project, due to this being a large project in a small area.

As there were limited working area, the challenge that needs to be overcome was drilling a hole with 168mm casing, with such a small rig. That is where the TerraRoc Symmetrix system came into the picture, where you can drill with casing simultaneously with lower torque requirements, meaning that the smaller rig was still able to meet the requirements of the project.

Keller also had to overcome the logistical difficulties in an urban environment, having suffered social unrest and the ongoing pandemic.

The daily consumption of cement in the work was over 100 tons on the peak days.

What is a Casing Advancement System?

The Casing Advancement System is a drilling method that casing and drilling occurs at the same time. Installing the casing when you are drilling minimizes the hole collapsing risk and enables contractors to perform their work faster with higher quality. The system adds value whether the mission is to install foundation, support elements or simply case the hole in collapsing formation.

Where do we use a Casing Advancement System?

As much as 90% of the land surface of the earth is covered with loose, unconsolidated material. When drilling in so-called overburden, the conditions are often challenging with risk for collapsing walls, hole deviations and failure to reach design depth or bedrock.

Why did we choose Symmetrix?

Symmetrix gives higher productivity in various ground formations and drilling angles. Also, without the need of double rotary rig or any extra requirements, Symmetrix drilling system can drill and case the hole efficiently.

With the special features of the ring bit set and the pilot bit of retrievable Symmetrix, drilling straight holes faster, and retrieving the casings is easy.

Equipment used in drilling and injection

The works have been carried out in the underground parking lots, so headroom of less than 2.4 meters have been maintained throughout both parking lots. To overcome these restrictions, adapted equipment had to be used as below: